Comic-con was inspiring. For years I have gone there simply amazed at the talent and polished look of a lot of the fan costumes. In the series I work on with Rod Mesa, Talos - Tales of the Pirate Ship Ferryman, there is a world of characters and weapons. In a pivotal scene in the first book, one of the characters comes face to face with Captain Lucky's Noctall 22.  Yes, that's 22 mm, not .22.  Wielding a twenty-two millimeter barrel of plasma shot, the good captain can hold her own.
At roughly an inch and a half diameter, the barrel is incredibly intimidating. I am attempting to create her pistol from scraps of wood and household items.  This is my first attempt at modelling since I was a kid, so bear with me.  See the paragraph beneath each photo for details. 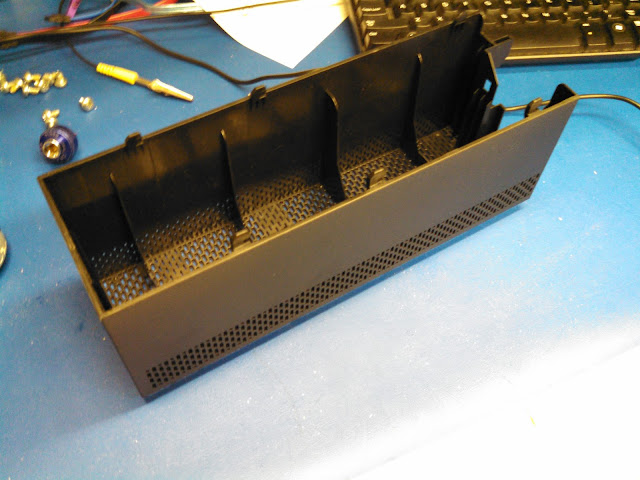 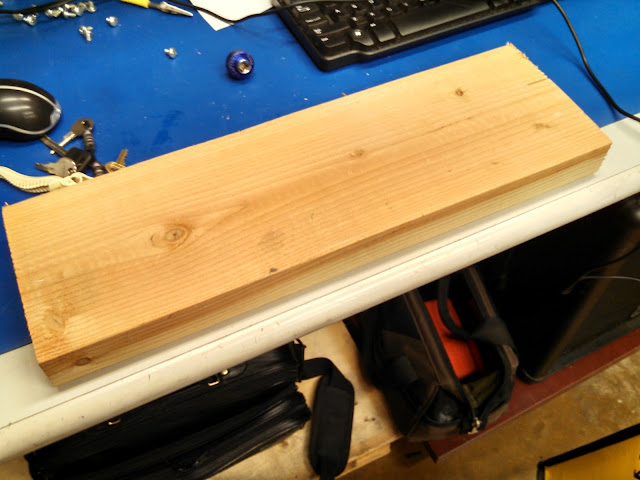 2.     I went rooting around the basement and found some cut off pieces of wood.  This is a hunk of Douglas Fir.  Not ideal for strength, but it will cut easily enough.  I just need to be careful cutting with the jigsaw. 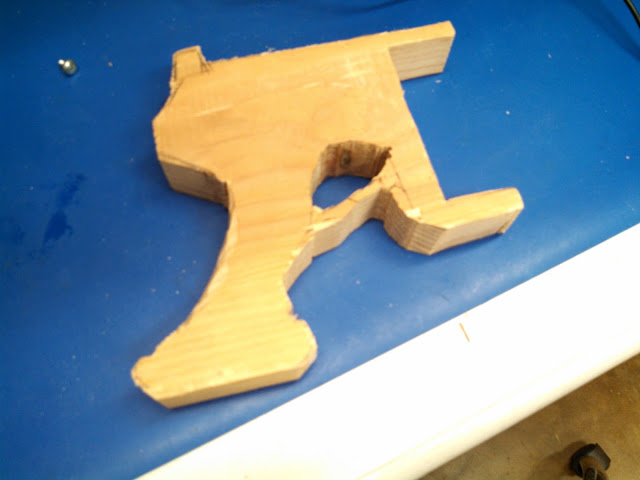 3.      Okay, yes, this is a different piece of Doug Fir, but I wanted to show you in the figure before this one the kind of wood I used.  This was the same type of Fir, but a little wider. I think it was a 12" x 2" stock.  I took a pen and drew out the rough shape I wanted.  The handle is obvious, on the left.  That big squared notch on the right is for the piece I showed off earlier. Lets start putting that idea together, shall we? 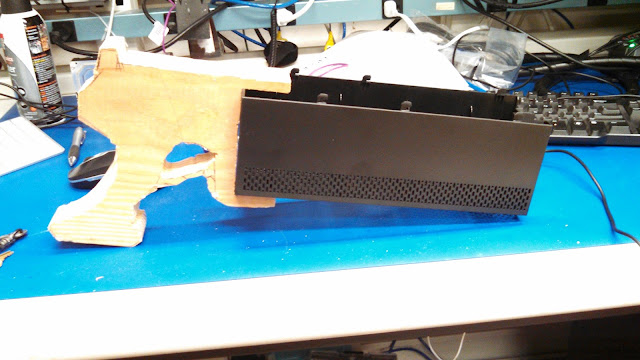 4.     I had traced out the flat end of the plastic so that the receiver can fit flush against the shroud.  Check it out.  Can you see what I saw?  Maybe not quite yet, but its surely taking shape. 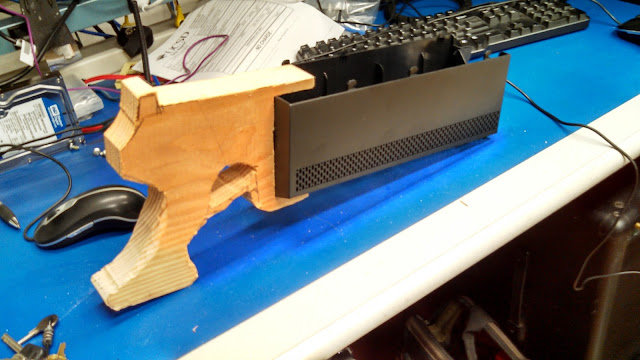 5.    I'm pretty excited about this. And look at all that room inside the shroud for a light kit!  This is going to rock. 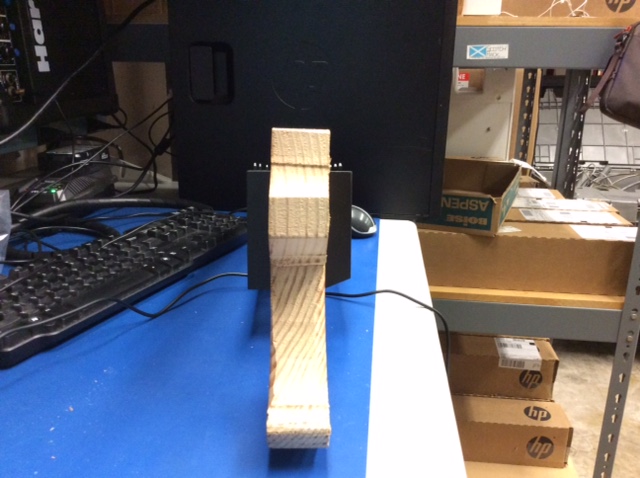 6.      I chose this particular piece of plastic because it has an asymmetrical shape along the length.  See how the black plastic has an angled face at the bottom on the right? I love that aesthetically.  Don't worry too much about the board being a little warped. that's going to be sanded flat by the time I'm done.

So, the good news is that I still have a ton of work to do on this.  So, it will only get better from here. I need to hand cut and sand the details in with hand tools and a good dremel tool.

The bad news is that I need to go find some 1.5" PVC to cut in as the barrel. Until then, this is all you get.  Hopefully I can update this sooner than later.  Space Pirates are very picky about their weapons. I think this side arm will really show what a good captain should carry on board her own pirate ship.

7. Once the basic shape was cut out with the jigsaw, I used a variety of wood files to shape the handle.  I used a mounted vise to hold the base of the handle area.  Once the curves were worked in, I used some 80 grid sandpaper to take out the roughness of it. 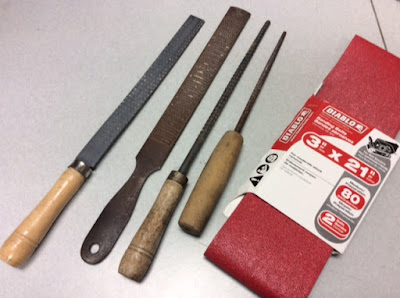 I like to use belt sander sheets for this part.  Tear the belt into a few 1/4 to 1/2 inch strips about 20 inches long and you can pull the paper around your work while it is in the vise. 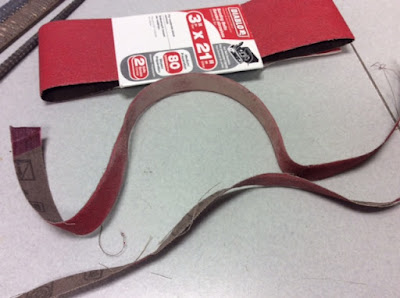 8.  I waited until the majority of the shaping and sanding work was done before I shortened the bottom of the gun handle. Waiting to do that gave me more surface area to put into the vise to get a better hold on the work I was doing.  Looking below at the handle, you can see that I cut the base at a slight angle and left a flat butt on the bottom of it. I cut out notches for three fingers below the trigger as well.  I will need to cut the top and bottom notch a little deeper for the finger grooves. 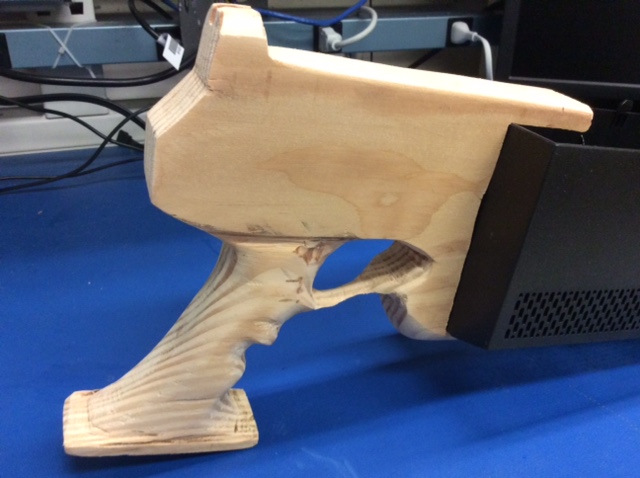 9.  Most of the work I did on notching out the finger grooves was done with a high speed Dremel Tool and a cut-off wheel. This sped up the shaping time. The trigger guard was shaped almost completely with the narrow 80 grit sandpaper. After the 80 grit, I switched to 120 grit.  The Douglas Fir is so soft that anything else would have cut it too fast and then it would become easy to make a mistake.

10.  The rear sight on the top of the gun was cut out with the same Dremel and cut-off wheel. I like the effect that the 45* angle gives it.  The groove in the middle of the sight was also cut out with the cut off wheel.  I am beginning to really like that Dremel tool. 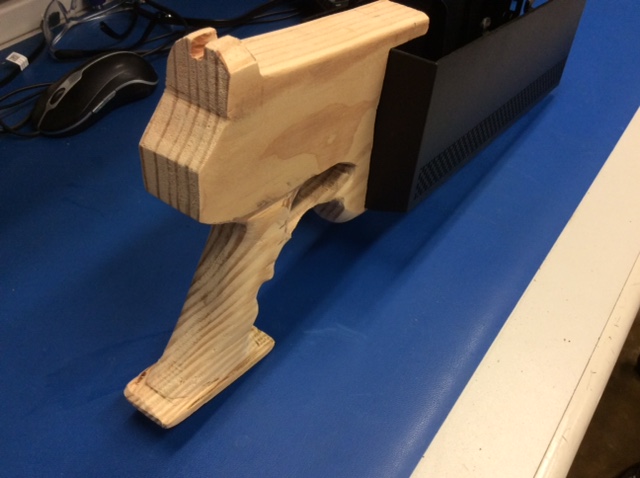 11.  On the left side of the handle, I made a very discrete notch for the thumb at the top of the handle. It's just enough to make the thumb comfortable. 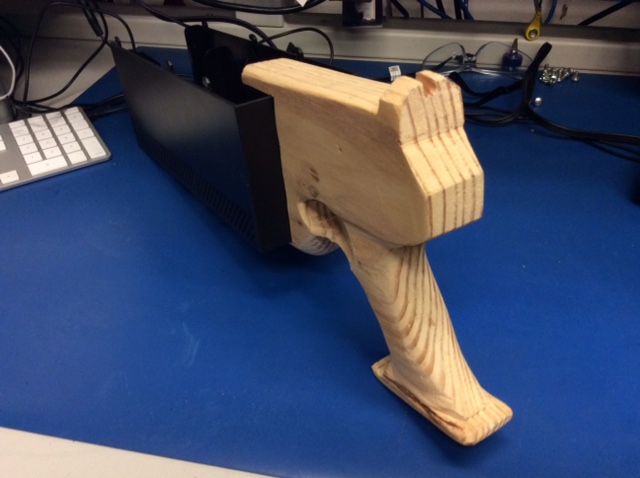 12.   This project is coming along slowly, but surely. Let me know if you have any questions or comments by using the comment section below. At this time, I am working out the electronics portion of this weapon.  The fictional manufacturer of the line of guns is called Noctall.  This is going to be a 22 mm plasma pistol.  I will be adding the short barrel and barrel sight in the near future, as well as completing a cover for the top of the shroud. 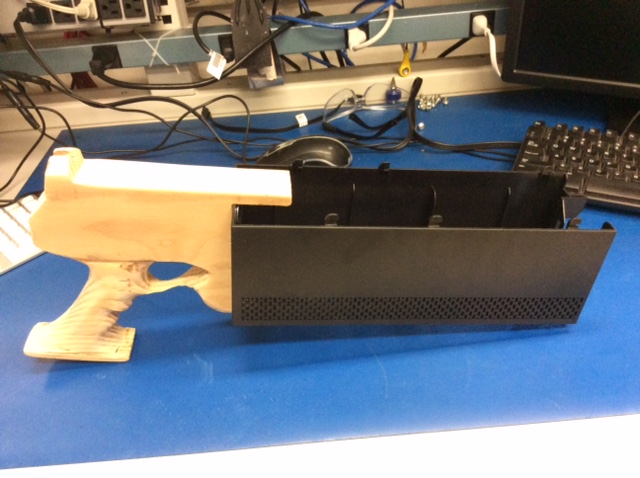 13.  Once I decide on how I will set up the electronics, I will be chiseling out a compartment to install the trigger and some of the circuits.  Until next time... 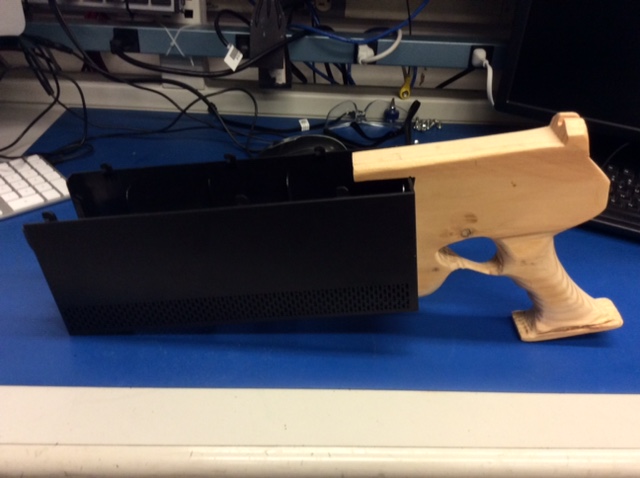 Posted by Unknown at 1:40 PM No comments: